Milk
​In English lore, brownies will take bowls of fresh milk and/or cream, sometimes bread or honeycomb. In Gotland, fairies were offered milk, beer and flax seeds. Other offerings are things like cakes and honey. Some brownies just ask for a portion of every meal the family has. Margaret Moone fed her twelve imps with bread and beer.

In John Milton's L'Allegro (published 1645) "Faery Mab" ate junkets - a cream and rennet dessert sweetened with sugar, sometimes with other spices added or served with cream. (Previously, Ben Jonson's Entertainment at Althorp, a 1605 play, described how "Mab the mistress-fairy" liked to "rob the dairy" and could either help or hinder butter-churning.)

In Danish tales, the house spirit called the Nis wanted an offering of groute or porridge with butter in it. If the butter was missing, the Nis would be furious. (Keightley, Fairy Mythology, pp.142-143)

In Malaysia the Bajang, an evil spirit sometimes kept as a familiar, requires eggs and milk.
In the Tale of Elidurus by Giraldus Cambrensis, the pigmy men  “ate neither flesh nor fish, but lived on a milk diet, made up into messes with saffron.” (Saffron also features in American tales of tommyknockers, or mine spirits, originating from the tales of Cornish immigrants who worked as miners in Pennsylvania. A correspondent to one website wrote that the miners always left their leftovers from their meals of saffron cakes for the tommyknockers: "To not do so was very bad luck." Saffron cake is a popular part of Cornish cuisine.)
​In Cambrian Superstitions by William Howells (1831), the fairies eat "ewd u llaeth" or "flummery" out of stolen eggshells. Flummery is a dessert pudding created from oatmeal.

Fruit and Vegetables
Plants are often closely connected to fairies. Blackberries were said to belong to the devil or the pooka after Michaelmas, and would go bad after that date. Churnmilk Peg and Melch Dick were fairy characters who watched over unripe nuts.

According to William of Newburgh, the Green Children of Woolpit would eat only raw broad beans when they first arrived in a human village. Broad beans were some of the most widespread beans in Europe, but incidentally, Greek philosopher Pythagoras believed that broad beans or fava beans were a symbol of death. Pliny clamed that followers of Pythagorus believed that the flesh-like fava beans housed the souls of the dead. This belief, whatever its source, drew mockery.

Meat
According to Otia Imperialia by Gervase of Tilbury (written between 1210 and 1214), the miniature portunes enjoyed meals of roasted frogs.

In an English tale, pixies steal and eat a man's cows, then restore them to life. However, if any bones are broken or lost, the resurrection will be imperfect. (D. L. Ashliman, "Fairy Theft")

In a tale told by Lady Wilde, a young man is carried off to a fairy hall where the fairies are preparing to eat an old woman. (Legends, Charms and Superstitions of Ireland, p. 73)

Fungi
Many varieties of mushrooms have been tied to the fae. They’re the perfect size to be used as tables and chairs by tiny beings. Along the same lines, toadstools got their name and supposedly their poison from the idea that toads sat on them.

Fuzz ball mushrooms are filled with a brown powder that flies out, and fairies were supposed throw this in people’s eyes to blind them. Fuzz or puff-ball has the Puck-inspired name of puck’s fist, cos-a-phooka or phooka’s-foot.

​Fairy buttons and fairy butter both take their names from the obvious source. Fairy butter or witch’s butter is a jelly-like bright yellow fungi, which is edible. Supposedly fairies just left it lying around on dead rotting trees after rainfall.
According to Wirt Sikes, the ellyllon feed on fairy butter (ymenyn tylwyth teg, toadstool) and fairy victuals (bwd ellyllon, a butterlike fungus).

"Foyson"
Some tales have fairies take the essence from food, leaving the physical matter without any nutrition or goodness to it. Reverend Kirk called this essence the "foyson." Others called it the "toradh" or "quintessence." 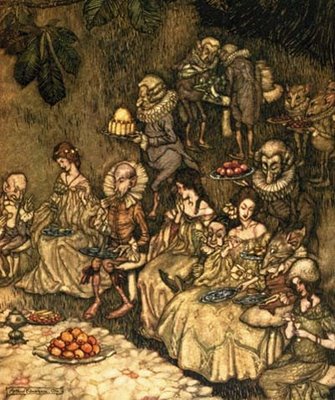 Fairy Menus in Literature
In the 17th century, poetry describing miniature fairy courts came into style. The sumptuous feasts enjoyed by these literary fairies were often embroidered. They were so exotic that some of them sound downright inedible.

From the poem Oberon’s Feast, by Robert Herrick: For bread there’s a single grain of pure wheat. They drink dew carried and flavored by a violet (which are also edible, by the way). Then we get horns of butterflies, cuckoo’s spittle, fuzzball pudding (fuzzball is a mushroom), ants’ eggs, beards of mice, a newt's stewed thigh, an earwig, a fly, a moth, withered cherries, mandrakes’ ears, moles’ eyes, stag’s tears, dewlaps of a snail, and a nightingale’s broken heart. (Wow.) Dewlaps are the folds of skin on an animal's throat.
In The Beggar to Mab, also by Herrick, a beggar asks Mab scraps like a bee’s abdomen, an ant, the cleft ear of a mouse over-sour'd in drink of souce (salt-pickle), a cricket’s hip or ankle bone, a sprouting pea, flour of fuzzballs (the mushroom again), and meal of mill-dust (a fine floury dust made when you mill wheat).
In Britannia’s Pastorales, Book III, the bread is hazel-nut kernels. For wine they have early dew, mel-dew and honeysuckle. Then come the courses: a grasshopper cooked in white broth, a whole roasted ant, five crayfish eggs, the udder of a mouse, two hornets’ legs, pickled sloes in a steed of olives, the petty-toes of a bat, three pickled fleas, a cricket from the brine, and the "lusty chine" of a dormouse.
This paragraph does not make sense because I have not managed to define all these terms yet. Pettitoes are pigs' feet that people eat, and there is a Lincolnshire dish called stuffed chine, made of salt pork stuffed with herbs.
In "The Pastime, and Recreation of the Queen of Fairies in Fairy-land, the Center of the Earth," from Poems, and fancies written by the Right Honourable, the Lady Margaret Newcastle (1653), Mab’s table is a mushroom with a tablecloth of spiderweb, with a seat of thistledown and an acorn cap for a cup, filled with nectar. She eats flies and various wild and tame birds, as well as omelets of ants’ eggs. Her milk as well as other dairy products such as cheese and butter come from dormice. The fairies also prepare “Pudding, Custards and Seed-Cake” sweetened with honey.
The lower-class fairies eat dormouse.
When hawking, Mab uses a hornet to hunt things like partridge flies. To hunt lizards, she rides a grasshopper. She carries a bow made of a willow branch and arrows made from rosemary leaves.
Much later, in Peter Pan in Kensington Gardens, fairies drink blackthorn wine, berberris wine, and cowslip wine, or they would if they could lift the heavy bottles. They have bread and butter the size of a small coin, and cakes the size of crumbs. Their butter comes from the roots of old trees (a reference to the fungus called fairy butter), and they have sugar and other delicacies.