Tom Thumb: an American-built steam locomotive created in 1830. This was a prototype created to prove that trains could outsped horse-drawn wagons, and got its name for its relative small size.
​More information

Tom Thumb: a small open boat (several of them, actually) used in 1796 by Matthew Flinders, a navigator.

Tom Thumb bit: a kind of bit mouthpiece for horses. It's sometimes referred to as a snaffle, but it is not as gentle as that kind of mouthpiece, and has a bit of a bad reputation.

Tom Thumb Toy cash register and typewriter, miniature metal machines for children, produced in the 1940's and 1950's by the Western Stamping Company in Michigan.

Tom Thumb (TT), the smallest size of a faucet aerator

The Tom Thumb Annual Floating Art Exhibition, founded in 1998. It is not actually floating - it is student-founded and is held in different places.

Sir Thomas Thumb line of dollhouse furniture and miniatures
​
Tom Thumb Food and Pharmacy: a supermarket chain owned by Safeway and begun in 1948. It was founded as a small store than could still compete with national chains. 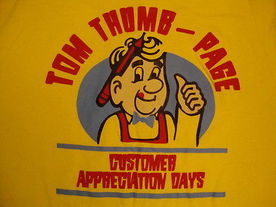 The Tale of Two Bad Mice by Beatrix Potter, published in 1904, tells the tale of two mice named Tom Thumb and Hunca Munca. They were named for Potter's pet mice, named in turn for the characters in Fielding's Tom Thumb the Great.

Tom Thumb (1966): jazz composition by saxophonist Wayne Shorter - named for pianist Bobby Timmons, who used the nickname Tom Thumb.
General Tom Thumb: stage name of Charles Sherwood Stratton, one of P. T. Barnum's performers. His name and many of his stage roles were based on the fairy tales. He was a worldwide celebrity.
Admiral Tom Pouce: stage name of Frisian performer Jan Hannema, who like Stratton had a form of dwarfism. He may have been inspired by General Tom Thumb, who used the name General Tom Pouce in France.